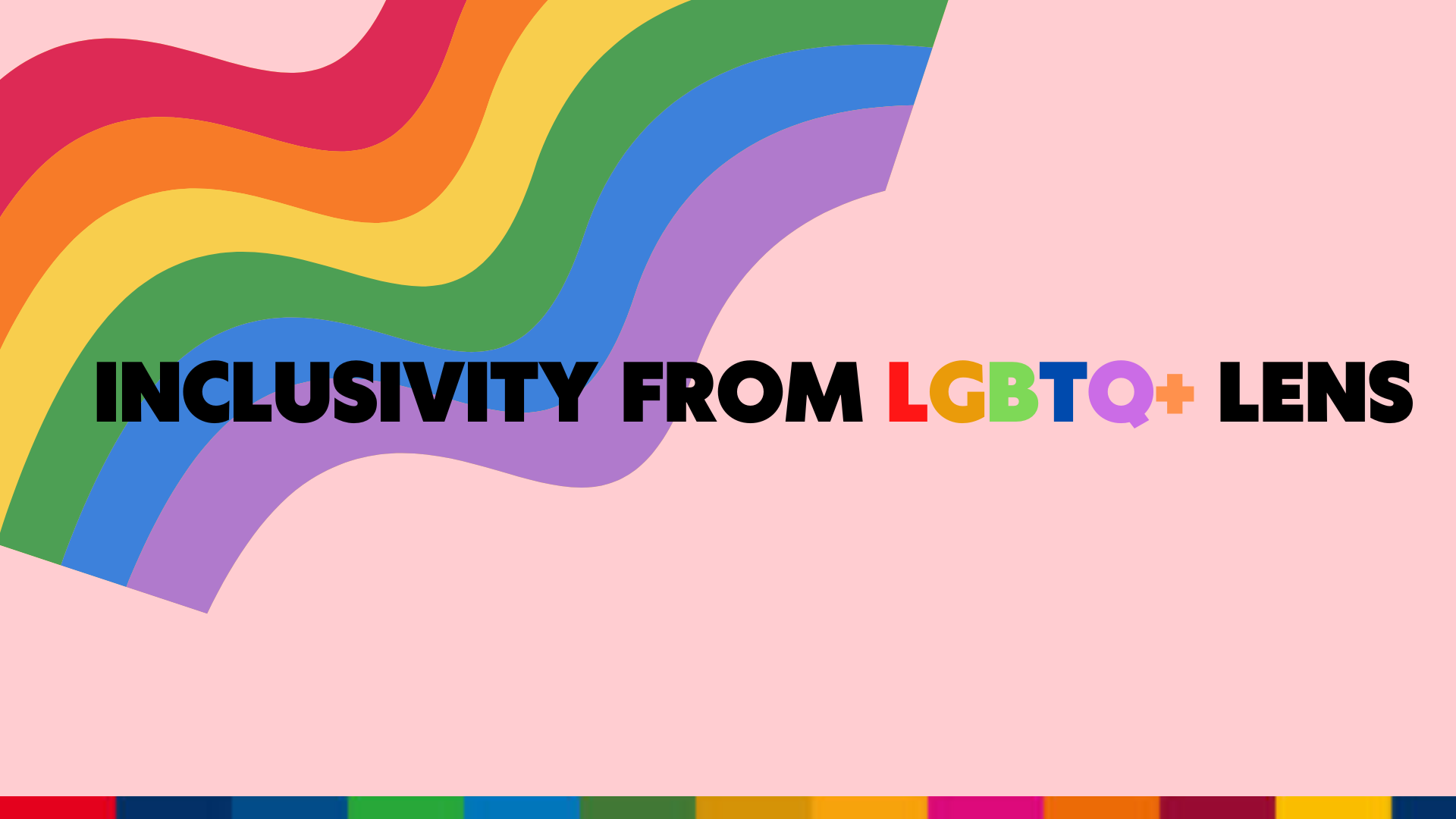 Author: Toreiloi Ronglo is a graduate from St Stephen’s College, University of Delhi. Currently, she is interning under Shaping Youths Future Project, NIUA.

While major efforts are put into bringing marginalised communities under the umbrella of inclusion, it is imperative to bring in LGBTQIA+ narrative. The values and objective of equality, accessibility, safety and participation should be kept at heart since the community is equally a part of our society. Society is collectively responsible to create a social, economic, political and digital space for them to feel safe and to achieve this, a constant effort towards reducing inequalities, improving liveability and improving their participation in decision making is required.

As the June month commences, we take this chance to celebrate inclusivity from the lens of LGBTQIA+ community. An entire month is observed to celebrate and support the culture, lifestyle and rights of the LGBTQIA+1. This month is marked by the Gay Liberation Movement that took place on June 28, 1969 in NYC West Village in America. The police raided a popular gay bar called the Stonewall Inn. It was common for police to raid gay bars, only this time the patrons fought back leading to major protests across the city that lasted for days. Since then, every year June month is celebrated internationally as Pride month to mark the movement. A huge parade, live theatre, street plays, memorials and other activities are carried in form of protest and solidarity. It is widely participated by youth dressed in bright rainbow colours; each colour having distinct meaning also indicating the diversity within the community. Besides the commonly represented rainbow flag, each sexual orientation further has their own flag. It goes to appreciate the nuances within the community whose experience and struggles can be different from another.

It has been 52 years since the first protest broke out and since, we only see an increasing volume of crowd in parade. It reflects as a sign of solidarity for equal rights, treatment and opportunities for LGBTQIA+ community. While many countries have legalised same sex marriage, sadly India is not a part of it. The Supreme Court verdict on Navjot Singh Johar vs Union of India ruled out Article 377 as unconstitutional for infringing the right of privacy and autonomy. This landmark case legalised homosexuality in India. Although progressive, Indian legal policies are yet to be entirely inclusive of all communities2. Odisha Police made an opening for transgender community as a practice of giving transpeople equal opportunity that ensures their livelihood and also gives them some degree of social security. Initiatives like this can be replicated throughout India.

Although there is no definite age of coming out, 3 a study conducted by San Diego State University found that 1% of the kids of the age 9-10 years identified themselves as a part of the community. In the study, it was reported that 48% of the surveyed children in high school could identify that they were gay. However, there is a distinction between identifying one’s sexuality and “coming out”; a practice of self disclosure about their gender identity, sexual and romantic orientation. Very often the coming out experience may not be pleasant4. A survey conducted by Swasti Health Resource Centre in 5 states of southern India (Tamil Nadu, Karnataka, Maharastra, Andhra Pradesh and Telangana) revealed that 14% of the respondents from the community have experienced some sort of emotional trauma, 8.9% faced sexual violence and 9% physical violence for owning their sexuality5. The violence, in turn translates to members of the LGBTQIA+ community leaving their homes to escape abusive environment. An estimated 40-50% of homeless youth living in the street of New York City are identified as LGBT. Being a part of the LGBTIQA+ community has been observed as a form of pathology, so much so that people are taken to psychiatrist or psychologist for conversion/ aversion therapy6. Aversion therapy was used to “treat” homosexuality in many NHS psychiatric hospitals in England as well as the Maudsley, including Glenside (Bristol), Upton (Chester), Graylingwell (Chichester), Banstead (Surrey), and Crumpsall (North Manchester). Apart from treating homosexuality as a diversion or sickness, the medical accessibility for the community is also questionable7. College of American Pathologists conducted survey which revealed that 29% of the transgender, 8% of the lesbian, gay, bisexual, and queer respondents were denied healthcare services because of their sexual orientation. A survey conducted by National Centre for Transgender Equality and the National Gay and Lesbian Task Force in US showed that 50% of the health care providers acknowledged lack of knowledge about medical care for transpeople. Other than the dismissive attitude in extending medical facilities, there is also lack of knowledge in medical field with respect to the community’s need.

There is need for reformative changes in society to secure, uplift and include LGBTQIA+ community. The above cited studies confirm that till present there is discrimination and violence acted upon the community. A helpline number specifically dedicated to report violence against the community can be an additional practice to the one by Odisha Police8. An article from The Guardian, a UK based news media talked about age friendly care homes for LGBTQIA+ community. Survey by LGBT Foundation on the impact of Covid19 revealed that many members of the community were left alone as their families did not accept their identity. A community centre for senior citizens belonging to the LGBTQ was made to protect the vulnerable. Initiatives as such to address the housing challenge for LGBTQIA+ community can be extended to India.It should be realised that there are many subdivisions within the community in terms of age, ethnicity, class and caste (in case of India) etcetera that needs to be highlighted while approaching the problems and struggles of the community. It is important we break through the sexual binary. A healthy sex education that brings LGBTQIA+ narrative rather than simply “to the opposite gender,” making public spaces like washroom more inclusive, welfare programs are few other suggestions for coming time to shape inclusion for all.

7 Shabnam A., (August 2020), Accessing Basic Healthcare is still a horror in India for LGBTQIA+ community, Youth in
Awaaz
8 Pugh R.,(October 2020), ‘A game changer’.The UK’s LGBTQIA+extra-care housing scheme gets go ahead, The
Guardian